The Top 10 Resorts in Europe is as follows:

Published annually the Condé Nast Traveler’s Readers Choice Awards featured over one million votes this year from nearly 77,000 readers.  There were no hotels in county Cork on the list this time round however several other hotels in counties around the country were awarded with the prestigious titles. The awards are broken down into various categories including best cities, best islands, hotels, resorts and cruise lines. 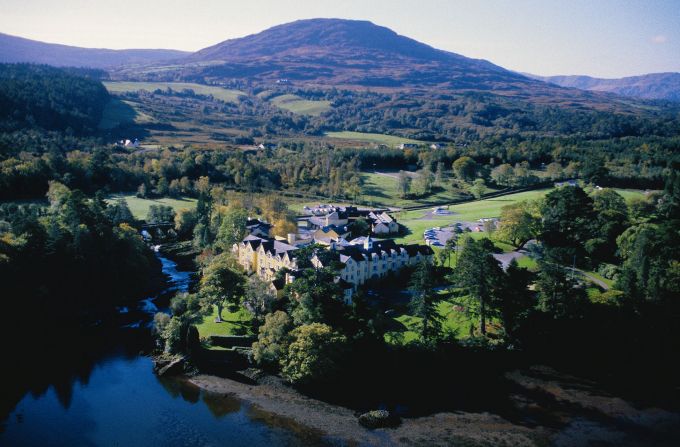 Sheen Falls Lodge in County Kerry which has ranked number one in the Top 10 Resorts in Europe list by Condé Nast Traveler Magazine.

Sheen Falls Lodge which overlooks the scenic Sheen Waterfalls, not also reached the top position on in the Top 10 Resorts in Europe but it also ranked position 82 on the global list of Top 100 Hotels & Resorts.

“We are extremely honoured to be named the number one resort in Europe and to be one of four hotels from the UK and Ireland in the Top 100 hotels and resorts in the world,” said Patrick Hanley, General Manager, Sheen Falls Lodge. “A special thank you must be extended to the team here who dedicate themselves and make an exceptional effort to ensure all guests have a pleasant and memorable stay.” The Kenmare five-star is commended by readers for its “first-class service” and “very pretty views”, according to the magazine. Its “very high-quality design” also merits a mention.

The stunningly beautiful Ashford Castle ranks 97th in the world is also described by readers as being in a “class of its own”.  The resort also has “beautiful grounds, fantastic recreational activities” and “outstanding service”, according to readers. The resort was formerly the Guinness family home, and the guest rooms are found to have high ceilings and four-poster beds. The five-star Ashford Castle is also currently undergoing an extensive refurbishment programme.

Another Irish hotel in the West of Ireland, the Ballynahinch Castle which is situated in Connemara also features on position 23 in the 25 Top Hotels in Europe.”The setting is something out of a fairy-tale book – lush greenery, lake, silence,” readers report. “It’s just gorgeous, like a rich uncle’s country estate.”

The Condé Nast awards are very positive for Ireland giving international recognition for Irish destinations and hotels for people planning a trip to Ireland.