Galway’s literary festival Over The Edge continues to grow

January 2014 will see the 11th anniversary of “Over The Edge” a series of monthly literary readings in Galway City Library. The event has continued to grow over recent years to become Ireland’s leading literary reading series. Organised by poets Susan Millar DuMars and Kevin Higgins, the event was founded as a platform for emerging poets and fiction writers. Over 300 authors been involved and over 40 have gone on to have their work published in book form.

Susan Millar DuMars recalls how the initial impetus for Over The Edge’s founding came from the lull in literary activity that afflicted Galway back around 2002;

“It was frustrating. Here we were in Galway, a small city on the west coast of Ireland that had already given the world Salmon, Macnas, and the Druid Theatre; three internationally recognised arts institutions. There were many of us happy to stay up all night writing crazy modern masterpieces. But once we had written them, what then?”

In the 10 years since its conception the event has remained true to its roots as very little has changed. The original purpose of Over The Edge was to provide a showcase for writers who had not yet published a book. Originally authors were allowed Fifteen minutes for each of three readers (poetry or prose), followed by an open mic where absolutely anyone can get in on the act.

Although well-known authors now regularly make the trip to Ireland for the Over The Edge, its popularity has spread to such a degree that a minor change to the line up resulted in one established writer on the bill with two unpublished writers thus boosting the already high attendance’s.

Another interesting aspect of Over The Edge is that featured writers only appear once as DuMars explained:

“We decided that from the beginning, that writers would only read once at Over The Edge… we didn’t want to have the same old faces over and over again. It keeps the thing fresh for the people who are coming to hear it, they know it is going to be different every time.”

The next Over The Edge reading is on Thursday, January 23rd, at Galway City Library at 6.30 p.m. 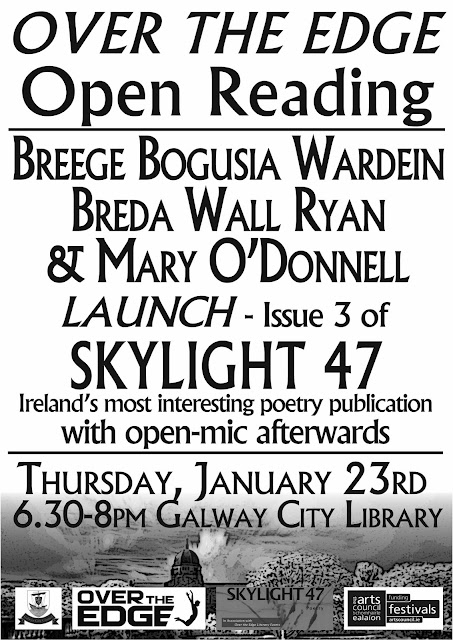