Posted on November 19, 2007 by Jeanette Schuermann

This fam trip, organized by the Derry Visitor and Convention Bureau, focuses on Derry City in Northern Ireland with special emphasis on the Banks of the Foyle Halloween Carnival. It takes in hotels in and around Derry as well as the city’s key attractions and is not just for tour operators but also for journalists and members of the Northern Ireland Tourist Board.
As expected from a Halloween fam trip, our journey begins on a dark and windy night in West Cork, when my colleague Genevieve and I set out from the office to make our way to Kinsale where we will spend the night before the big trip. Big in so far, as it is a long journey from our corner of West Cork to Derry. There being no flights from Cork to Derry we have to catch an early morning flight (7 am) from Cork to Belfast and then take a 2 hour bus ride across Northern Ireland. After a quick stop in Cork to pick up some essential party accessories (there is a Halloween fancy dress party on Wednesday night on the itinerary) we arrive in Kinsale around 2 hours later. I have never been to Kinsale but don’t really get to see much of it as it’s dark when we arrive. We check into our hotel, Actons, which nicely have given us a complimentary room for the night, and only venture out to get something to eat as it’s late and both of us are starving. The food is lovely but definitely on the expensive side, as Kinsale is gourmet capital of Ireland.

It’s 6 am when we leave Kinsale on Wednesday morning (so no nice seaviews for me this time either) for Cork airport where we enounter the first problem for the day. Genevieve has a toy rifle (part of her cowboy outfit for the fancy dress party) which needs to get on the plane with us. After some discussion and more phone calls the man at the check-in desk informs us that the toy rifle cannot go on the plane at all, neither as hand luggage nor in the hold. as all replica guns, including toy guns are totally forbidden. So we have to sadly leave the toy rifle behind while we conveniently forget to mention that there is also a toy revolver in Gen’s check in bag. The rest of our journey runs smoothly and we are passing through some amazingly beautiful countryside as our journey leads us straight through the Sperrin Mountains.

Arriving in Derry we meet Aoife, who works for the Derry Visitor and Convention Bureau (DVCB) and she leads us to the City Hotel, our hotel for the night, where we meet up with the rest of the group (mostly journalists and representatives of the Northern Ireland Tourist Board). Then we sit down for tea/ coffee and scones (mhmmm) while we listen to a presentation about what Derry has to offer before we set out for some first hand experience. Tommy Carlin, our tour guide who is dressed up as a grand wizard (it’s Halloween after all) takes us around the city walls on a ghost tour. 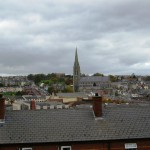 Derry is Ireland’s only completely walled city and you can walk around the entire city center on the walls if you are fit and adventurous enough. These walls were build in the early 17th century by the Honourable the Irish society to protect the city’s Scottish and English settlers during the plantation and as the building was financed by guilds of the city of London, the city was then called Londonderry. We also learn that the city’s coat of arms has a skeleton on it, which is very fitting for a city which has the first and longest running Halloween celebrations in Ireland. Legend has it that this skeleton represents Walter de Burgo, a 14th century Norman knight who had an affair with his sister-in-law. When his brother found out, he invited him to his castle and on a tour of the dungeons (under the pretext of planning an extention to it) locked Walter into a cell and starved him to death. After so much walking and a visit to St. Columb’s Cathedral, the first church build in Ireland after the reformation, we need some food and have a traditional Halloween lunch in the Linen Hall bar. The food is lovely and the only scary thing is the size of the dishes: they are frighteningly big.

Afterwards we take a guided tour of the Tower Museum in Derry, the only museum 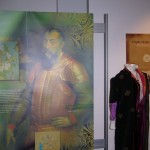 having won the award for the best Irish museum and the best British museum. Our guide, Jerry, takes us through the Story of Derry exhibition and points out the highlights. If you want to find out about the red hand of Ulster, the siege of the city in the 17th century and the history of the city until today, that’s the place to go. They also have an exhibition about the Spanish Armada which we don’t get to see because we have an 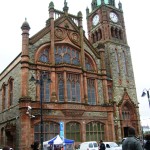 appointment with the Mayor to keep. So it’s on to the Guildhall, a neo-gothic style building, for drinks and a chat with the Mayor. We take a short tour of the hall and admire the fantastic stained glass windows and the huge organ in the main hall.

Then it’s back to business with a visit to the Ramada Da Vinci hotel for a quick tour of the hotel. It’s a 3 star hotel about a mile from the city centre which will undergo refurbishment in winter and then open as a 4 star boutique hotel in 2008. The unusual thing about this hotel is that it originally started out as a restaurant with the hotel being build around it.

By now it’s late afternoon and we have an hour of rest at the City hotel to relax and get ready for the Halloween fancy dress party in the evening. Some of the group had their costumes organized by the DVCB and are going as surgeons. Lucky them! We, however, have to stick to our home-made costumes: Gen is going as a cowboy and I am going as a witch. When we rush into the city center to get some last minute accessories for our costumes most costume shops are already stripped bare. There are a lot of people in fancy dress around so anybody in “normal clothes” definitely sticks out.

At 6. 30 pm we are back in the hotel foyer in our costumes and the whole group heads to the hotel restaurant for dinner. We are lucky as the parade passes exactly in front of the hotel. However, some hundred people have had the same idea and are already gathered in front of the hotel so we don’t get to see that much from the restaurant. Then everybody rushes out to watch the fireworks which are brilliant and last an amazing 20 minutes! Thanks god I just have to keep an eye out for a large group of surgeons to find my group again in the crowd. After dinner (a 3-course buffet dinner which has managed to get everybody close to bursting) we move upstairs to the Halloween ball. The band is great and we all have great fun. Everybody is in fancy dress and there are some great costumes around: from the more traditional witches/ wizards and ghosts, over Mexicans, and Leprecauns to Devils and angels.

The next morning sees everybody gathering a bit hungover as we leave at 9.45 am to visit the Museum of Free Derry. 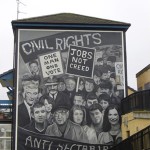 It’s a tiny museum founded by the Bloody Sunday Trust and tells the story of the civil rights movement and the creation of Free Derry in the 60s and 70s up to Bloody Sunday, 30th January 1972, when the British army killed 14 unarmed demonstrators. What makes it even more interesting is the fact that our guide is the brother of one of the men killed on Bloody Sunday.

After all this history we focus on hotels for the rest of the day. First is a visit to the Beech Hill Country House Hotel, an 18th century manor house on a beautiful 32 acre estate which served as a US army base in WW2. Then we move on to the Radisson SAS Roe Park Hotel in Limavady, about 20 minutes from Derry. 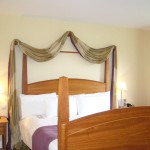 Having taken a tour of the hotel and the leisure center & spa with Elaine, the sales manager, we settle down for soup and sandwiches in the Coach House restaurant which overlooks the hotel’s own golf course. The highlight of the trip, however, is still to come as everybody on the tour is treated to a sample spa treatment at the Roe Spa. There are 4 treatments on offer (bathing treatment, exfoliation, facial or massage) and it’s quite difficult to make up our minds. In the end most people go for a massage (very handy after a late night). It’s quite funny to see everybody in their bath robes and slippers and feels a bit strange as it’s still pretty early. Unfortunately the time at the spa passes quite quickly and we have to leave to get back to the real world. Gen and I get a lift with Karen from the DVCB as we missed the visit to the Best Western White Horse Hotel. Thanks to her we get an exclusive tour around the 3 star hotel which has Derry’s largest pool and is less than a mile from Derry City airport.

On our way to the coach stop we get stuck in traffic and promptly miss our airporter bus back to Belfast by 1 minute. Luckily there is a public bus which leaves 20 minutes later for Belfast so we don’t loose much time and still make it to the airport in time. It’s nearly midnight by the time we finally get back home from this exciting but exhausting fam trip.

3 Responses to Halloween in Derry