Hundreds of Dolphins Spotted in the Irish Sea

Not too long after the magnificent sightings of humpback whale frolicking in the waters off Baltimore in late November captivated the nation, once again the waters off Ireland proved a hotspot for whale and dolphin spotters. A few days ago marine biologists traveling aboard the Rosslare to Fishguard ferry were on hand to capture footage of a once in a lifetime sight of a superpod of dolphins hunting out in the Irish Sea.

The Wales-based Sea Trust was conducting its monthly survey on a Fishguard to Rosslare ferry when the common dolphins were spotted leaping from the water. The biologists who filmed the event were amazed to see the sea erupt with hundreds (conservative estimates veer between 250 and 500) of dolphins leaping out of the water to form a superpod. What was so unique about this spectacular natural occurrence rarely seen in European waters was that it is more common in the summer as opposed to winter months. Dolphin and whale sightings have traditionally been more common in the summer but recent sightings as of 2009 dispute this previous assumption.

Along with the sighting of the five humpback whale bubble feeding rarely seen in Irish waters in late November, this reminds us once more of Ireland rich marine attractions and brings attention to the many sights that can be seen on a day out in its water throughout the winter and summer months.

Watch the video here for yourself: 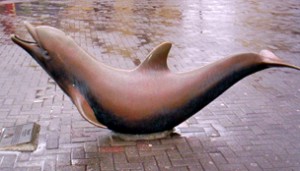 There is another well known Irish place that is associated with dolphins. Dingle in Co. Kerry, has a long and well known association with beloved “Fungie”, who has been swimming with the boats and tourists in Dingle harbour since 1984. You can take a one hour boat trip in summer months to see Fungie in his natural habitat. Save money and visit our Ireland vacation deals page before booking your 2013 vacation to Ireland.

1 Response to Hundreds of Dolphins Spotted in the Irish Sea