The countdown is certainly on to the New Years Eve Festival in Dublin. This year’s festivities are set to take the Dublin city by storm with a three-day city-wide music and arts festival, running from the 30th of December until the 1st of January.

Hoping to be the biggest New Year’s celebration the city has ever seen, people taking a vacation in Ireland over New Years Eve should make Dublin on their itinerary list with headline acts such as Kodaline, James Vincent McMorrow and Walking on Cars set to take to the stage on New Years Eve. 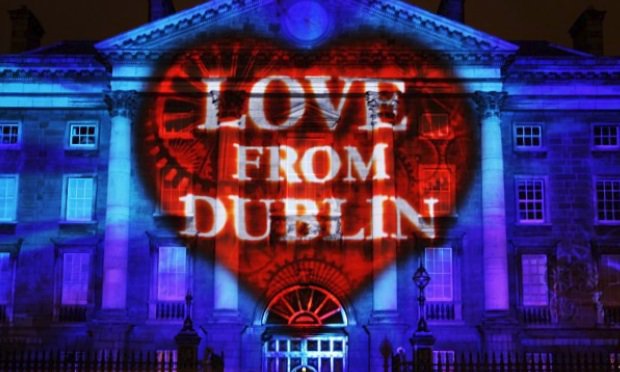 Dublin’s New Years Festival runs from the 29th December until the 1st January.

Not only will the New Years Eve festival and Christmas party hold headline acts on stage, there are also a planned fireworks display at St. Stephen’s Green, as well as the opportunity to follow the captivating music and arts trails all around the city which promises to showcase secret performances, live music as well as Irish and international art and culture at its best.

Sample culinary delights and Irish artisan produce at Dublin Castle’s New Year’s Festival Food Village where visitors to the city can also view 3D animations at the various luminosity events that will be held. Visitors can also join in on the magical “Procession of Light” to see Dublin’s streets dazzle or there is also the option to join the Spoken Word Festival which boats poetry, literature, discussion and debating forums.

For visitors on a trip to Ireland who only have a few days to spend in Dublin, the New Years Festival promises not to disappoint. The New Years Festival Dublin Discovery Trail in particular allows visitors to explore the best of Dublin city over two days. Visitors can also choose from Dublin city’s top 20 cultural venues which are planning to offer a host of discounts to Dublin attractions and guided tours.

For those feeling energetic there is also a 5km fun run at Dublin Castle, five festival zones packed with fun itineraries located around the city and the Big Brunch which is taking place in Meeting House Square on New Year’s Day.

So, whether you are young or old, native Dubliner or a first time visitor, Dublin is the place to be for New Years celebrations!