Why Finn McCool is Still Cool?

Posted on February 4, 2008 by Kristel Enkelberg 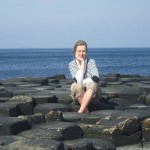 Finn McCool, a 52 ½ feet tall Irish hunter-warrior was known as a friendly giant and is something of a symbol for County Antrim hospitality today. People could often see him and his wife Oonagh gazing across the sea waving to the Scottish Giant to come over for a visit. The sea of Moyle being something of a challenge between the Irish and Scottish coasts, Finn decided to build a bridge from the many hexagonal stones that lay strewn along the shoreline. What happened next you can read at the World Heritage Site yourself- the Giant’s Causeway.

Maybe the pathway was an easy access later in the 17th century to the Scottish & English settlers making Ulster a fertile soil for plantation – to read more about this facet of Irish history check here – Modern Ireland.

This is a story about what you can see in Northern Ireland and especially on its coastline.

Northern Ireland consists of six of the nine counties of the province of Ulster, lying in the northeast of the island of Ireland, covering 14,139 km2. It has its own government – the Northern Ireland Assembly and currency being the pound sterling – it is effectively a part of Britain with its own unique identity, like Scotland and Wales.

Donegal is a good access point into Northern Ireland if you have traveled from the west coast of Ireland for example. The city of Derry or Londonderry (depending on your politics) is very close to the border with Donegal county, a border which no longer exists physically on the ground but is merely a line on a map nowadays. The Tower Museum and the Museum of Free Derry offers a detailed and intriguing story of the city’s history.

n June 2007. I was well impressed by the sandy beaches of Portrush and Portstewart and a stop at the Mussenden Temple was a relaxing lunch break in County Londonderry. I could see the Downhill castle standing high on a hilltop from the car. It is rather a roofless shell after a fire in 1851 however the charming glen planted with wild flowers and the enquiring looks of the sheep lead you to the clifftop where the temple stands. It is a memorial for Mrs. Mussenden built for her as a library by her cousin the Bishop of Derry. The splendid view is well worth
the time to get there.

A perfect overnight stay is in the village of Bushmills in County Antrim. Just a stone’s throw away is the Giants Causeway. You need good shoes and fine weather to enjoy the most breathtaking and inspiring coastline. I can still feel the strangeness of this place and Thackeray has expressed his feelings about the Causeway with the following: “When the world was moulded and fashioned out of formless chaos, this must have been the bit over – a remnant of chaos”.

You can enjoy a good twenty- minute walk from the Causeway to Carrick- a -Rede, the island which can only be reached by the perilous swinging rope bridge. It was erected by salmon fishermen to allow them access to a valuable fishing spot from where they would cast their nets into the sea. If it is a very windy day the bridge may be closed; something for which you may be thankful. If it is open you will need very steady pair of legs and must not be afraid of heights in order to cross and take some hard earned photos on the bridge itself.

From the Northern tip I headed to the Glens of Antrim. The uniqueness of the glens are the variations of a natural landscape including vertical cliffs, tundra plateaus and glacial valleys. Hugging the coastline are timeless fishing villages like Ballycastle, Glenarm and Cushendall where you can easily find a farmhouse B&B for the night.

The next morning a lovely walk in the Glenariff Forest Park ended with a picnic. As I have missed taking forest walks in West Cork where I live, I thoroughly enjoyed the one hour hike and taking pictures of the waterfall known as the Ess na Larach. It tumbles through a wooded gorge created by the Glenariff River.

I suppose no journey to Northern Ireland is complete without a peak into Belfast. It is a bustling city with its many new chic hotels and modern bars .The Ulster Folk and Transport Museum seven miles east of the city adds a bit of unusual flavor. It is an Open Air folk museum that illustrates the way of living in the 1900s.

Before heading home I had come to the conclusion that the country of Finn McCool is well worth visiting. A rental car with an Irish plate, no borders and few pounds sterling in my pocket, I dashed through Northern Ireland in just 3 days but it still left me haunted by the memories of its nature and its landscape.

I stand amid the roar
Of a surf-tormented shore,
And I hold within my hand
Grains of the golden sand–
How few! yet how they creep
Through my fingers to the deep,
While I weep–while I weep!
O God! can I not grasp
Them with a tighter clasp?
O God! can I not save
One from the pitiless wave?
Is all that we see or seem
But a dream within a dream?

3 Responses to Why Finn McCool is Still Cool?