The much awaited and anticipated, National Heritage Week is set to kick from tomorrow until the 28th of August. The theme for this year’s event is “100 years of heritage”, a journey back through one hundred years of Ireland. As part of the week-long festival, the Heritage Council of Ireland who manage the National Heritage Week are publicising a range of events taking place in every county of Ireland, many of which are free of charge on Sunday August 28th.

This weekend there is a range of events planned including a medieval festival in Kildare as well as Youghal in Co. Cork which will bring history to life for all of the family. Cork Heritage Open Day which takes place on the 20th August will also see over 40 historic and heritage buildings in Cork open their doors to the public for free for one day only. The Hollywood Fair in County Wicklow also invites attendees to come dressed in 1950’s costume, promising a variety of activities including crafts, threshing, music, sheepdog trials as well as vintage vehicles. 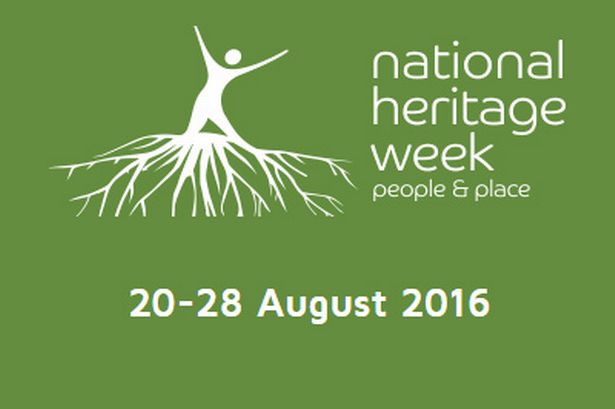 Ideal for all of the family, join in on the mini-beast and bug hunt taking place in Fitzgerald Park in Cork or enjoy a wildflower tour of the Phoenix Park, Dublin where you can identify the treasure trove of wild plants growing within the park. At the famous Lough Hyne in County Cork, touch and feel underwater creatures from the tanks with biologists while you learn about them.

In Dublin, Ireland’s capital city take a tour of Arbour Hill, a tour which focuses on the 1916 Easter Rising or enjoy a tour of Farmleigh Estate in the Phoenix Park. Another popular choice, take a guided tour of Iveagh House, headquarters of the Department of Foreign Affairs & Trade. This building was designed in 1736 by Richard Castle and remodelled in the 19th century when it became the Guinness family townhouse.

In the South West of Ireland, take a guided tour of Ardfert Cathedral in County Kerry, Adam and Eve’s Church in County Dublin. Discover the 13th Century Norman Castle and 18th Century Queen Anne style house on a heritage tour of Roscrea in County Tipperary.

The above are just some of the many events taking place as part of National Heritage Week www.heritageweek.ie