Those planning a trip to Ireland and to it’s main capital city of Dublin are set to be wowed by this year’s parade. The main event of the festival, the parade is set to take place in Ireland’s capital city of Dublin at 12 noon on March 17th and it will weave its way through the heart of the capital city. Preparations for the parade can take up to two years. More than 2,000 band members are set to take part in this year’s parade.

The theme of this year’s festival explores the concept of “home” and it’s expected to generate more than €70 million for the Irish economy over the five day festival. Running from the 15th-19th of March the festival is set to involve thousands of home-grown as well as international musicians, dancers, storytellers and performers.

Lord Mayor of Dublin, Mícheál Mac Donncha said that the theme of this year’s festival “home” would involve “the exploration of my home, your home, our home”. The festival programme is set to include a film project, street- theatre, literature, talks, music, Irish language and visual art. 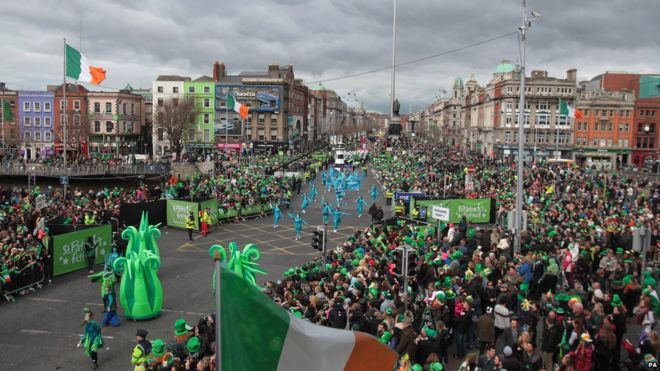 “For those of us living here or the Diaspora, home will forever be a part of us, and for this year’s festival we want to explore and celebrate what this means,” said Susan Kirby, St Patrick’s Festival chief executive.

“For some it is our physical place of birth and holds a special place within us, while for others it isn’t physical but rather the feelings, the emotion, the character, the people and the culture, that shape it and make it.”

In 2016 alone, more than 105,000 visitors planned their Ireland travel trip around St. Patrick’s Weekend, spending an average of 8.8 days in Ireland and 6.5 days in Dublin.
Fáilte Ireland chief executive Paul Kelly said the St Patrick’s festival was a “crucial element” of the tourism sector which generates €8.8 billion in revenue.

“It’s worth about €70 million in revenue, but in terms of a showcase its value is priceless,” he said. “We’ll be bringing in international media from all over the world and the coverage that will result from that will be invaluable to us.”

Funded by Fáilte Ireland, Dublin City Council and the Department of Culture, festival organisers have additionally commissioned film maker Donal Dineen to create a documentary, Pathways: Irish Routes to the Art of the Matter, around this year’s theme.

The documentary will feature successful Irish people abroad from the creative sector, and it will examine how they got there.

Full information on this year’s festival can be found here http://www.stpatricksfestival.ie/