A Whale of a Time In West Cork

While the Greenpeace ship, Esperanza, and Australian surveillance ships track the Japanese whaling fleet in the Southern Ocean in an effort to stop them killing minke whales and fin whales, they plan to kill 900 minke whales and 50 fin whales by mid April, the whales and other marine life off the Irish coast are thankfully under no such threat.

West Cork is now recognised as one of the best places in Europe to go whale watching and sometimes they come so close to the shore that it is not even necessary to go out in a boat. From the kitchen window at home, near the village of Castletownshend in West Cork, I have seen a pod of more than 20 fin whales (the second largest animal ever to live on this planet) less than a mile from the shore. They stayed there for a couple of weeks feeding on sprat before moving on. Fin whales are most commonly seen between August and December. Minke whales are also common and even the occasional humpback whale.

Dolphins too are a common sight off the Irish coast. One evening a couple of years ago we 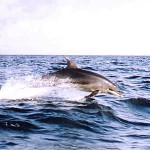 headed out from the fishing village of Baltimore with the hope of seeing some. We didn’t have to go far and when they saw us coming they came to meet us. Far from being scared of the boat they came right up to it to play in the waves alongside us. A school of about a hundred dolphins so close to us that we could hear their high-pitched squeaking. 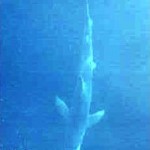 Shark are also plentiful a bit further offshore with a variety of species including blue shark, basking shark and the occasional six-gilled shark. One summer out in a small boat in Castletownshend harbour we came across a massive basking shark, bigger than our boat which it decided to swim around. A slightly scary experience because although the shark was completely harmless we were worried that it would tip the boat and we’d all end up joining it in the water. 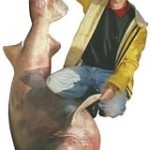 Charter a boat from one of the many fishing villages in West Cork including Castletownbere, Baltimore, Courtmacsherry, Kinsale, Glandore or Union Hall
and spend a day shark fishing. One of the biggest fish ever caught off the Irish Coast was a 315 lb six-gilled shark caught off Baltimore. Hooked by my cousin Stefano off my fathers boat, the shark weighed twice the Irish record but unfortuately could not be claimed as a record. After more than an hour of trying to land the massive six-gilled Stefano had to hand the rod over to another angler and a record cannot be claimed if the rod is handled by more than one person. With many hotels in West Cork to choose from, there is no excuse to visit this great part of the country!

1 Response to A Whale of a Time In West Cork