With no plans for Halloween and never having been North of the border I was delighted to be invited to Derry for the Banks of the Foyle Halloween Carnival by the Derry Visitor & Convention Bureau. I was greatly looking forward to this trip and I have to tell you it surpassed my greatest expectations. Derry is a beautiful city and I would highly recommend at least a 2 night stop to anybody but particularly for anyone with an interest in the history of the troubles in Northern Ireland.

After a brief overnight stay at Actons Hotel in Kinsale my colleague Jeanette and myself were up at 5.30am on November 31 to catch our 7am flight to Belfast with Aer Aran. After grabbing a croissant at Belfast City Airport we boarded the Airporter bus outside which took us straight to Derry city centre in less than 2 hours dropping us right beside the Derry City Hotel.

After welcome refreshments of coffee and scones we were off on a walking tour of Ireland’s Historical Walled City with our guide Tommy Carlin who was festively attired for the occasion in a wizards outfit. Tommy proved an interesting and informative guide and I 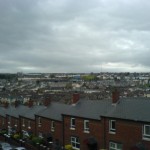 had my first taste of the rich history of the city of Derry. He also injected a few ghost stories in light of the occasion. As we walked through the streets I couldn’t help but notice the festive atmosphere with every corner taken over by stalls selling Halloween costumes, masks and accessories galore. After our walking tour which included the famous Derry walls as well as the protestant Cathedral which was the first church built after the reformation we wound up at the Linenhall Bar. Here we were treated to a very tasty lunch of massive dimensions served by Tarzan and a lion!

Feeling full we made our way to the award winning Tower Museum to view the Story of Derry exhibition. This gives an easy to follow, well laid out history of Derry right from it’s earliest days in the sixth century A.D. when a monastery was founded there. The Tower Museum is also home to a new Spanish Armada Exhibition but we had to give this one a miss as we had an appointment with the Mayor of Derry.

The Mayor has his office in the Guildhall and on arrival we were ushered into the council chambers where the political parties of Derry meet. After a brief address by the Mayor in which he described where the different parties sit when the chambers are in use, we were brought through to his office where 2 attendants were waiting to pour us drinks from the Mayor’s own bar. After this wonderful hospitality from a man who only the day before had hosted Dr Ian Paisley in the same rooms we were taken up to view the main hall which contains a beautiful range of stained-glass windows presented by the London Livery Companies.

Back out on the street we boarded a bus and made a short trip to the Ramada da Vinci’s Hotel. This hotel is undergoing a major upgrade and is a modern and comfortable hotel with a good atmosphere in the 3 bars giving you lots of options when it comes to entertainment for the night. After a tour of the hotel and some refreshments it was back to the Derry City Hotel to get into costume for the evening’s festivities. 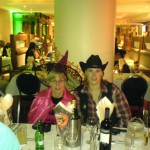 Clicking my spurs and toting my gun (can you guess what I was???) I made my way down to the bar where I met up with the rest of my group (witches and surgeons one and all in case you’re wondering). By this point everyone in the hotel and it seemed the whole of Derry was in costume and were you in civilian dress you looked very strange indeed. Once we were all assembled we made our way into Thompson’s on the River where we sat down to the finest buffet dinner I think I’ve ever experienced. Everything was delectable but the desserts surpassed all that had gone before with every single one having that ‘homemade’ taste rarely found in restaurant food. A welcome break between courses came with a carnival parade followed by a 20 minute fireworks display all viewed from the unparalleled vantage point of the steps of the Derry City Hotel. 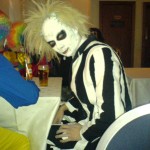 Coffees finished it was time to head upstairs to the Ball which was taking place in the Corinthian Ballroom, a spectacular air conditioned room with views of the River Foyle and the Guildhall. The band were fabulous and I was quite content to sit and gape at the fantastic array of costumes on display. Honorable mentions to ‘Bosco’ and ‘Beetlejuice’. After a few dances I made my way upstairs to bed and may I say that only 2 floors above the ballroom I was in no way aware of the noise from below. 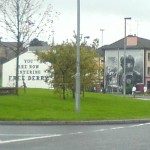 The next morning after a wonderful buffet breakfast we were taken by coach the short distance (easily walked) to the Museum of Free Derry which illustrates the people’s story of the struggle for Civil Rights, The Battle of the Bogside, Internment, Free Derry and Bloody Sunday. This is a truly moving experience and a true education can be gained within this museum. After taking a few hurried snaps of the murals on the walls outside the museum it was back on the bus and out to the Beech Hill Country House.

The Beech Hill Country House is one of the Manor House Hotels of Ireland and anyone who has stayed at any of these properties will know the standard to expect. It may be of interest to our American friends that Bill Clinton has his favorite room in this hotel and strangely enough it’s not the Presidential Suite although I couldn’t tell you why! The grounds of this hotel are gorgeous with 32 acres of woodland and landscaped gardens to wander through at your leisure. Come back to curl up beside a roaring fire and you’ll have some idea of the relaxation to be found at this wonderful hotel.

On leaving the Beech Hill Country House it was back on the bus and off to Limavady where we were in for a real treat at the Radisson SAS Hotel. After a tour of this luxury hotel and Golf Course, complete with driving range we were treated to a light lunch followed by what was for me a real highlight of the trip. Each of us was given a treatment of our choice at the wonderful ROE Spa. I opted for a massage and afterwards unwound in their relaxation room. Pure Bliss!

Unfortunately this wonderful respite had to come to an end though I could have happily checked in and never gone home! Instead it was back on the bus and back to Derry to the Best Western White Horse Hotel & Conference Centre which we had missed due to our mammoth journey the day before. Thanks to Keith for taking the time to meet with Jeanette and myself since we’d missed out on the day before. Now I have to say I would be an advocate of the Best Western Hotels. By and large they are reasonably priced comfortable hotels with excellent service. The White Horse did not disappoint and with a swimming pool larger than the one at the Radisson SAS it has plenty to offer the traveler on a budget. It is also worth noting its close proximity to the airport.

Leaving the White Horse Karen drove us down to catch the Airporter back to Belfast for our flight home. Rushing into the small bus terminal we were horrified to be told we were too late as the next bus was too late to make our flight. Thanks to the very helpful girl at the Airporter terminal who was a lifesaver, refunding our tickets and pointing us in the direction of the main bus terminal in Derry where we could catch the regular scheduled service back to Belfast in plenty of time for our flight.

After another uneventful flight back to Cork I arrived home tired and happy and determined to return to Derry in the very near future.

1 Response to Banks of the Foyle Halloween Carnival: October 31-Nov 1