The Giant Causeway is the North of Ireland’s most popular tourist attraction and yesterday it just got even bigger or better as the new 18.5 million visitor centre was opened by Peter Robinson and Martin McGuinness. 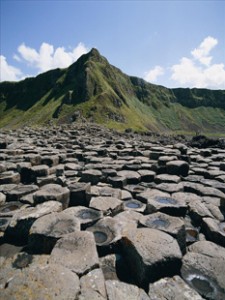 12 years after the old centre was destroyed by fire, the new facility on Antrim’s north coast was opened to the public and it is expected to be frequented by 600,000 visitors from around the world who travel to experience the Giant Causeway each year.

Apart from closing briefly over the Christmas period, the visitor centre will be open all year round and is completely different from the old centre in that its architecture has been deigned to be in tune with the rugged surroundings and has a grass roof and dark basalt columns, which wee quarried in Kilrea, County Derry, from the same lava flows that formed the Causeway.

An educational centre for visitors and tourists on vacation in Ireland, the centre has information and details of the many walks that tourists can take to the famous stones and along the cliff tops, and the new facility combines an interpretive centre with explanations of how the Causeway’s 40,000 basalt stones were formed, as well as stories about the areas myths, history, geology, flora and fauna.