Ireland gets ‘thumbs up’ from over 400 International tour operators

Tourism Ireland were showcasing the best of Ireland to over 400 top international buyers from 40 countries at the ExploreGB 2017 exhibition in Brighton recently.

Some of the world’s top international buyers from countries, including the US, Canada, Germany, France, Italy, Australia, China, India, and the Middle East, were treated to an overview of all that the island of Ireland has to offer visitors in 2017.

ExploreGB formed part of Tourism Ireland‘s ongoing partnership with VisitBritain, along with 13 tourism companies from the island of Ireland. The two-day workshop allowed both organisations to showcase Britain and the island of Ireland to an influential audience of international buyers which would hopefully assist in delivering additional itineraries and brochure pages featuring both destinations.

Their presence at ExploreGB also offered an ideal opportunity for Tourism Ireland to highlight the benefits of the  to those in attendance from China and India. The visa scheme enables leisure and business travellers from both countries to make trips to Ireland and the UK on a single visa. 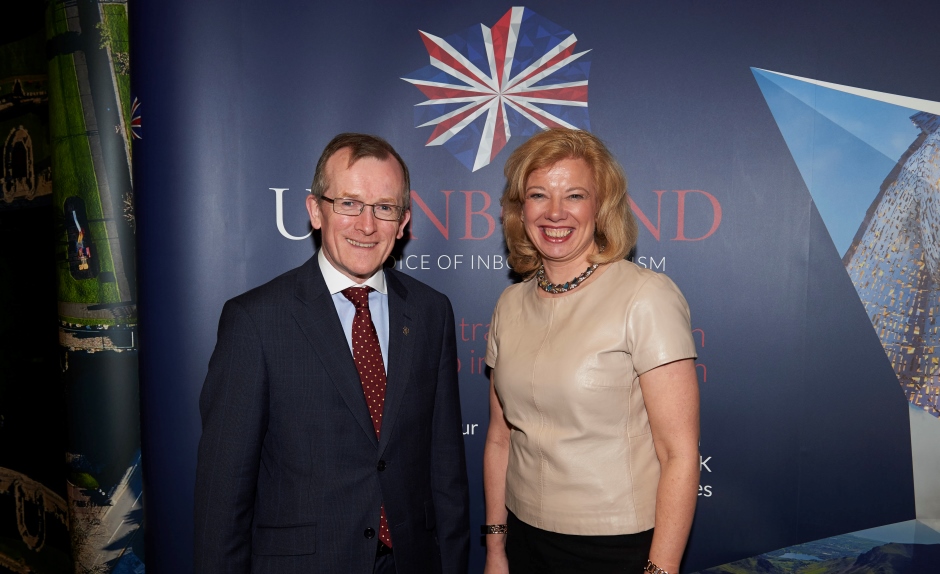 Niall Gibbons, CEO of Tourism Ireland, and Deirdre Wells, CEO of UKInbound, at ExploreGB in Brighton.

“We were really pleased to be part of ExploreGB once again this year – which provides another important platform for Tourism Ireland and our partners to showcase and sell the island of Ireland to key international travel buyers. We already work closely with VisitBritain, particularly in long-haul markets like China and India, to target people travelling to Britain and encourage them to visit the island of Ireland as part of their trip, and vice versa. A key message for us to buyers from China and India is the British-Irish Visa Scheme, which enables visitors from those countries to visit both Ireland and the UK on a single visa of either country.”