In 2014 an estimated 1.2 million visitors from the United States took a vacation in Ireland. This figure was a 15 percent from 2013 and it set a new record according to Tourism Ireland, who additionally plan to build on those numbers in 2015 with new plans to further promote the Emerald Isle.

Ireland’s visitors will be closely targeted in 2015 with special vacation packages tailored to their interests.  There are many reasons for the hike in visitors taking a trip to Ireland, from the now famous Wild Atlantic Way which runs from County Donegal to County Cork to the many sights and attractions in Dublin including the Guinness Storehouse and Trinity College. Also a 14 percent increase in peak season air capacity makes it much easier to travel to Ireland from 11 gateways in the United States. 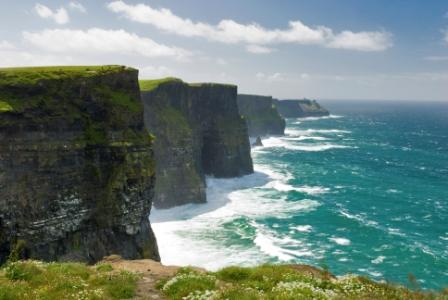 The Cliffs of Moher, one of the many attractions visited in the Emerald Isle in 2014 by the estimated 1.2 million visitors from the United States.

Visitors from mainland Europe increased by 7pc to 2.5 million while visitors from the United Kingdom, which is Ireland’s main tourism market were up to 8pc to 3.1 million.

In total over 7.25 million overseas visitors travelled to the island of Ireland in 2014, giving a much needed boost to the country’s hospitality industry. Room occupancy reached 64 percent in 2014, a rise from 3 percent in 2013 with Dublin leading the way with the second highest occupancy out of any city in Europe. The new figures show overseas visitors grew by 586,000 to 7.27 million, with increases across all key markets.

Irish Hotels Federation President Stephen McNally welcomed the news stating that “Ireland was now back on the tourism map.” Mr. NcNally added; “There is a real sense of optimism in the sector following a strong performance last year. Though still fragile, tourism businesses are seeing signs of an upturn in the home market with people gradually starting to take more trips at home and spending more money in the local economy,”