Ireland is the best country in the world according to the “Good Country Index”. The index ranks nations according to their overall contribution to humanity using 35 separate indicators from the United Nations, the World Bank and other international institutions spread across seven categories. 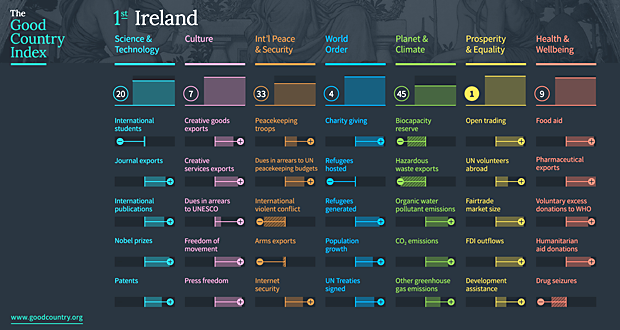 Ireland secured the top position on the list by finishing in the top ten in four of seven categories and it was six places ahead of the UK and 20 ahead of the US. Iraq, Libya and Vietnam all were joint bottom of the survey. The index which is updated annually assesses the size of a country’s economy as well as its global contribution to culture, science, technology, the climate, world order, equality amongst, health and well being amongst other factors.

British policy adviser Simon Anholt is behind the index and he described the idea as “pretty simple”. He said the intention was to “measure what each country on earth contributes to the common good of humanity, and what it takes away. Using a wide range of data from the UN and other international organisations, we’ve given each country a balance-sheet to show at a glance whether it’s a net creditor to mankind, a burden on the planet, or something in between.”

This comes as positive news for the much needed tourism boost for Ireland vacations and trips to Ireland, especially for county that has had recent struggles economically and politically.

This entry was posted in Ireland vacations, vacation to Ireland and tagged Ireland, trips to Ireland, Vacation in Ireland. Bookmark the permalink.