Ireland’s county names… What do they mean?

For many visitors enjoying a vacation to Ireland, it is not uncommon to come across signposts and literature referring to the name of the 32 Irish counties in Gaelic.

Followers of both Gaelic football and hurling will also be familiar with the counties of Ireland being displayed in the Irish language. But what do these names actually mean?

Ireland’s rich and ancient history emanating from Celtic era right through subsequent spheres of influence from overseas invaders such as the Vikings, Norse and, of course, the English has had a direct impact on the country’s place names.

We’ve gone through each of the counties of Ireland by province below giving the Irish translation and what it means in English:

Est. circa 1584, the name means “Macha’s height.” Macha was a Celtic goddess said to have given birth to twins after racing a horse.

Est. in 1584, it means “stronghold of the foreigners” (Vikings). It was also known by some as Tir Chonaill, which means “the land of Conall.”

Est. in 1584, the name translates to “Men of Manach” or, more specifically, “men from the county of the lakes.”

Est. in 1585, the name means “Land of Eoghan.” It’s a tribute to Eogan mac Néill, who founded the Kingdom of Ailech, which is present-day Tyrone.

Est. in 1556, the name derives from Uí Laioghis, which means “people of Lugaid Laigne.” Lugaid was granted land in the area after driving invaders out of Munster. Hard to spell, but better than its original name, “Queen’s County,” which was in honor of “Bloody Mary” Tudor.

Est. circa 1200, it means “church of Cainnech,” and was named in honor of St. Cainnech, who converted the county to Christianity in 597.

Est. in 1586, the name means “the port” or “the riverside fortification,” a reference to the Shannon River.

Est. circa 1200, the county is named after the Irish god Lugh (now spelled Lugh).

Est. circa 1200, the name comes from the Norse term for “fjord of the mud flats.”

Est. in 1607, the Irish name translates to “Church of the Mantan.” “Mantan” means “toothless one,” and refers to a saint whose teeth were knocked out by irish pagans around the time of St. Patrick. The Norse name for this area meant “the meadow of the Vikings.”

Est. in 1556, it was originally named after the Gaelic territory of Ui Failghe. In 1556, “Bloody Mary” Tudor named this area “King’s County” after her husband, Philip of Spain. The name was changed back to Offaly after the creation of the Irish Free State.

Est. in 1565, the name translates to “plain.” The county may have been named after the Norman de Clare family. Before 1565, Clare was known as Thomond, which means “North Munster.”

Est. circa 1200, the name means “swamp” or “marsh.” and is the largest of all the counties of Ireland, both north and south. Its nickname is the Rebel County and its red and white flag is known as the Blood and Bandage.

Established c. 1200, the name translates to “People of Ciar.” Break it down further, and you find that Ciar means “black” or “dark brown” and Raighe means “tribe.”

Est. circa 1200, the name means “bare spot.” The Viking name for the county was “Hlymrekr” which meant “mighty noise.”

Est. in the 13th century, the name means “well of the Arra,” a reference to the river that runs through the county.

Est. in 1565, the county was named after the river Gaillimh, which means “stony.”

Est. circa 1292, the name means “Comán’s wood” and was named in honor of St. Comán, who founded the monastery of Roscommon in 550.

Est. in 1565, the name means “shelly place,” a reference to the river’s abundant supply of shellfish. 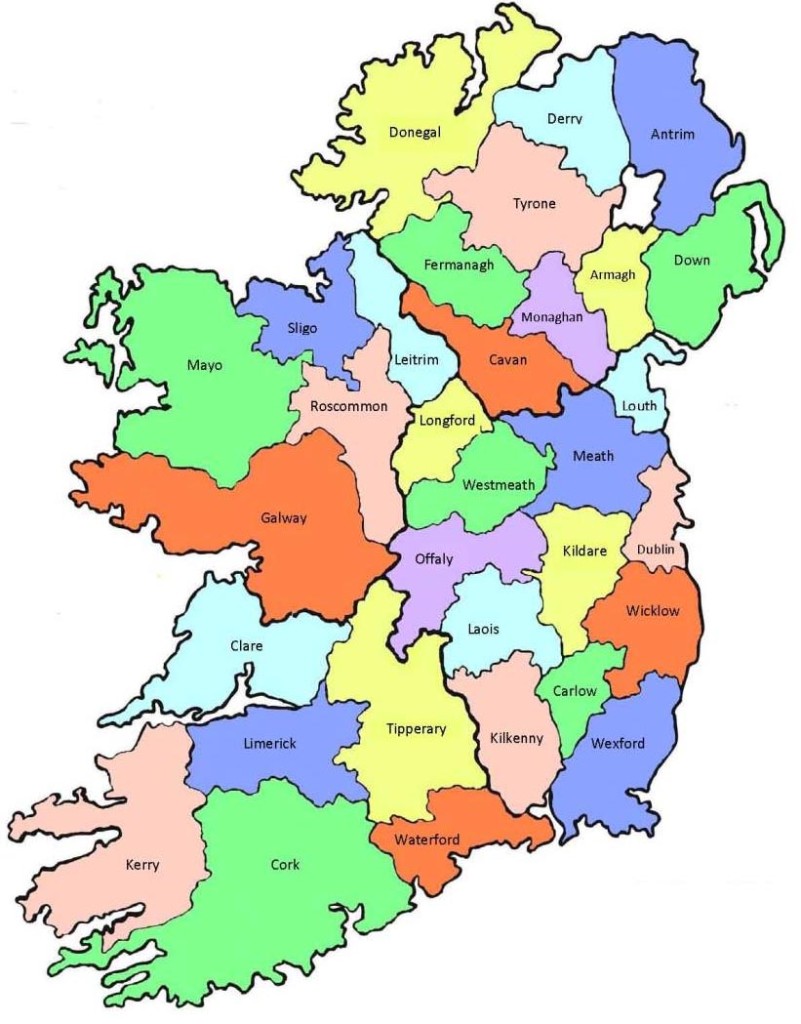