Posted on April 29, 2010 by Discovering Ireland

To further enhance our ever popular profiling of Irish surnames we’ve decided to move the fearure to our blog and allow for better and improved user interaction and feedback.

Taking the spotlight today is the name Sheehan or Sheahan. 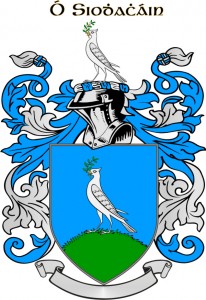 The popular name Sheehan or Sheahan, often referred to in the USA as  Sheen or Shean, is the anglicisation of the Irish Ó Siodhacháin, from a diminutive of siodhach, meaning ‘peaceful’.
The eponymous ancestor of the family is disputed, but must have been unique among the Irish of the day to have deserved the description “peace maker”. Not every scholar accepts this origin of the name, but given the fact that the sept’s traditional coat of arms features a dove of peace, there will be few of the name who will want to consider any alternative. One ancient genealogy places the sept’s ancestor as a brother of Brian Boru while another has him as a member of the Scanlan sept. The Book of Leinster refers to “Muintir Sidechain” from a distant relative of Brian Boru.

Cormac Cas was King of Thomond (Tuathmhumhan, modern county Clare with adjacent parts of Limerick and Tipperary) around the fifth century and he spawned a tribal grouping known as the Dál gCais or Dalcassians which dominated Munster until the final suppression of the old Gaelic order in the seventeenth century. Their most famous family is that of O’Brien, but the group includes other well known families such as McNamara, O’Grady, Heffernan, McMahon, Hickey, Clancy, etc. Regardless of the precise identity of their ancestor, the sept of Ó Siodhacháin is believed by most authorities to be part of the Dál gCais, having a chief residence in Lower Connello, Co. Limerick. O’Sheehan, O’Meehan and O’Cullane all served as chiefs in that barony. Over the centuries, however, the members of the sept migrated southwards and in modern times the name is most common in County Cork, though also found in Kerry(profiled in our top 10 places to visit in Ireland) and Limerick. The name starts to appear regularly in the records of Cork from the fourteenth century mentioned in connection with Kilcredan parish in the diocese of Cloyne on several occasions. We find John Shyghan of Youghal who was a tailor there in 1617. In the same town we find William Sheehan as town clerk in 1688. We also find one Thadeus O’Sheaghan as a Church of Ireland Vicar of Inchigeelagh in 1639. In 1689 we find one Capt. William Sheehan in King James army list.

It is one of Ireland’s very numerous surnames: combining the alternative spellings it holds the seventy-fifth place in the list thereof, with an estimated total population in Ireland today of about eight thousand five hundred persons of the name. Of these the great majority were born in Co. Cork or, on its borders, in the adjacent counties of Kerry and Limerick. Read further about this name Sheehan

Add your suggestions for next month through our comments below.