The West Cork region is known for boasting some of Ireland’s most stunningly beautiful, scenic and rugged coastline. The area attracts many people taking a vacation in Ireland due to the fantastic whale watching and sea kayaking and coastal walking opportunities it offers.

The spectacular West Cork region has also recently received rave reviews from the LA Times reporter Margo Pfeiff in her article; “Ireland’s Wild Atlantic Way makes a magical coastal adventure by car”. The West Cork region received the high accolade in the prestigious newspaper’s widely-read travel section in the popular California paper. Reporter Margo travelled from Shannon Airport, where she began her journey along the south-western leg of her Wild Atlantic Way adventure. 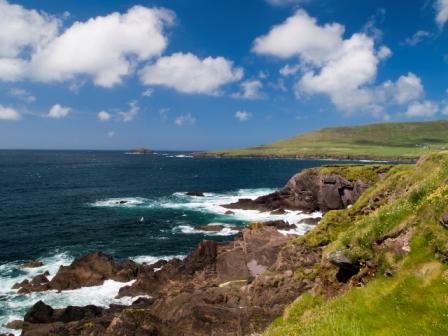 In her article, Margo raves about various West Cork highlights including the gourmet hub of Kinsale, Bantry House, Cape Clear island, Heir island and much much more. “I sailed to tranquil island outposts, strolled through the formal gardens and lush woodlands of the 97-acre Inish Beg estate, and nibbled local cheeses and homemade charcuterie with their makers at farmers markets. What I didn’t expect — though I should have in this land of leprechauns — were the little jolts of Irish magic along the way”, claimed Margot.

“I came for my favorite combo of travel activities — road-tripping through foodie country and exploring laid-back countryside on foot or by bike”, additionally claimed Margo.

The West Cork coastal route is just a small section of the 2,500 km Wild Atlantic Way routeway which stretches from Kinsale to Inishowen in County Donegal. The routeway is said to be the world’s longest defined coastal touring route. Launched in April 2014, the route was developed by Failte Ireland at a cost of €10 million.