The Ireland national rugby team gave their retiring hero Brian O’Driscoll the perfect send off after they defeated France 22-20 at the Stade de France in Paris on Saturday. The victory meant that Ireland were crowned as 2014 RBS Six Nations champions on points difference from old rivals England.

The match marked the final time O’Driscoll would wear the green jersey of Ireland following his decision to retire from the international scene after this year’s Six Nations championship. The clash also presented Ireland with an elusive chance to be crowned champions for the second time in five years following their Grand Slam back in 2009 and allow the Dublin native to bow out a champion at the end of his 142nd and final Test appearance.

The home side, who’s form had been questionable up until this game, started the match with real intent and Ireland may have feared the worst as a French team, clearly stinging from the criticism that had come their way after supports and national media.

Ireland did not panic in the face of the early French pressure, weathering the early storm before catching their opponents cold with two tries from Sextion and Trimble in the space of five first-half minutes. The French responded in the second half with a try from hooker Dimitri Szarzewski who plunged over alongside the posts. The conversion meant the difference was down to two.

With momentum and a partisan home crowd behind them the French went on to lay siege to the Irish defences in an attempt to clinch the winning score. With minutes to go it seemed the hearts of Irish sports fans would be broken in the when Chouly nipped in at the right corner, however, the television official decided that the final pass had gone forward. Soon the final whistle followed and Ireland captain Paul O’Connell proudly lifted the Six Nations trophy! 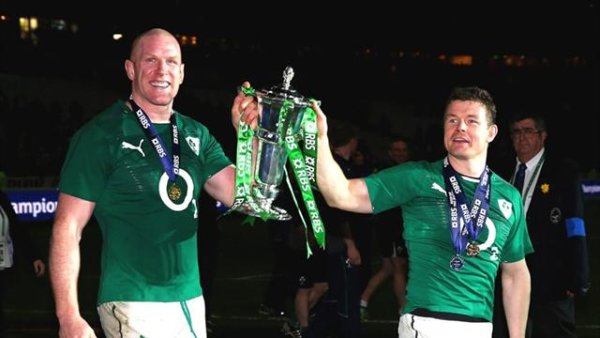 Following the match, an emotional Brian O’Driscoll went on to say:

“The emotions are starting to kick in now, it feels great to be a two-time Six Nations winner.

“So many seconds along the years and so many disappointments, it is great to finish my career on a high. When I do hang this jersey up on the hook inside it will be with fond memories.

“I am absolutely delighted. There is a huge Irish contingent here and I am glad we gave them something to shout about.”