With less than 4 weeks to go to the yearly celebration of St Patrick, on March 17, Guinness will flow from Malin to Moscow, the Chicago River will run green and parades will be held worldwide to celebrate the fifth-century preacher and patron saint of Ireland. 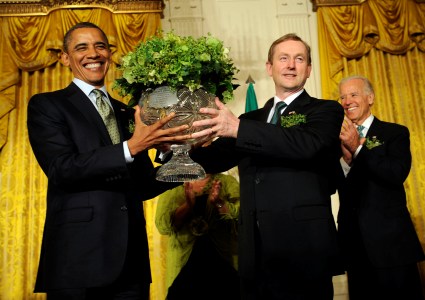 A little closer to home not only can you partake in the numerous parades on your trip to Ireland that will take place over the festivities, but if you are planning on taking a vacation in Ireland there are  hundreds of holy wells, sacred round towers and monastic remains all over Ireland. There are hundreds of saintly shrines to view all over Ireland, some of these sights include the following;

Founded by St Kevin in the sixth century, Glendalough which means the valley of two lakes in County Wicklow was once one of Ireland’s greatest centers of learning. Visitors can wander through the remains of a monastic settlement which includes a soaring round tower, churches and gravestones, as well as “St. Kevin’s Bed” — a man-made cave carved into the rock high over one of the lakes.

In County Offaly, visitors can explore the magnificent remains of a monastic site founded by Ciaran in Clonmacnoise. Dating back to the sixteenth century it includes the ruins of a cathedral, two round towers, three Celtic crosses and the largest collection of early Christian gravestones in Western Europe.

St Brigid’s round tower, cathedral and tranquil park with an ancient well, said to have healing powers in Kildare town, County Kildare.

St Declan’s fifth century settlement in Ardmore Co.Waterford including one of the tallest round towers in Ireland, an ancient church decorated with intricate stone carvings and the remains of an oratory.

At Fenit Harbour in County Kerry stands a large bronze statue in honour of St Brendan, the sixth century navigator, said to be the first saint to discover America.

This entry was posted in Ireland vacations and tagged Clonmacnoise, Glendalough, St Patricks Day, Trip to Ireland. Bookmark the permalink.