Waterford City has been hosting the renowned Spraoi International Street Arts Festival since 1993.  During this three day festival, which runs from the 1st to the 3rd of August,  residents of this medieval city take to the streets of Waterford and enjoy an international programme of street arts and spectacle where the majority of events are free.

The festival also features the Spraoi Parade, complete with hundreds of costumed performers, exotic floats, live music with special-effects and is created by a core team of professional artists aided by a large corps of volunteers. 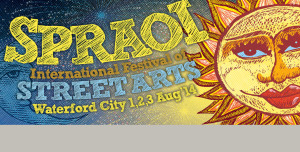 Founder and director of Spraoi, TV Honan, says the input of volunteers and local people has been a significant element in its success.“The Spraoi festival is professionally run but its energy comes from local people being involved. Because Spraoi has such a strong voluntary input, observers can miss the fact it is now rated as a significant festival on the European circuit of street art festivals.”

“Spraoi is now part of several European festival networks. One of our biggest selling points when we are trying to attract international performers is what those performers hear about Spraoi as they travel around Europe at other events.”

For those lucky enough to be in the sunny south east this long weekend as part of a vacation in Ireland, this festival promises not to disappoint. The medieval streets of Waterford will be transformed complete with squares and quays being transformed into stages for one of Ireland’s largest summer parties.

While Spraoi is much-loved and supported by local audiences, it also attracts a significant number of Irish and overseas visitors whilst taking a trip to Ireland, with an estimated 29% of last year’s audience originating outside Waterford.