The 2,500 KM Wild Atlantic Way is now alone one of the longest routes but it is becoming known as one of the world’s most famous routes stretching from Malin Head in Donegal to Mizen Head in Cork. This new partnership is set to promote the Wild Atlantic Way route as the ideal “location” for British holidaymakers looking to take a vacation in Ireland this Autumn. 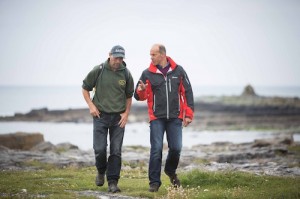 As part of its Autumn Campaign Tourism Ireland will produce four online films, one solely dedicated to the Wild Atlantic Way.  The campaign is set to reach approximately 6.5 million people across Britain as the film will be promoted on the Classic FM website for four weeks, from now until mid-October. One of the well-known TV faces, Phil Spencer will promote trips to Ireland over the coming weeks, by providing on-air mentions on Classic FM about the many things to do whilst holidaying in Ireland.

Vanessa Markey, Tourism Ireland’s head of Britain, said, “This targeted promotion has been specifically designed to highlight autumn breaks along the Wild Atlantic Way and elsewhere in Ireland and to appeal to our ‘Culturally Curious’ audience in Great Britain.”

“These are independent, active sightseers, who are typically looking to visit new places and expand their experience by exploring landscapes, history and culture. Our promotion with Phil Spencer and Classic FM fits very well with this important demographic and is just one element of the more extensive autumn campaign that we will be rolling out very soon – all aimed at boosting late-season travel to Ireland from Great Britain and our other markets around the world.”

“Britain is the largest market for tourism to the island of Ireland and we are really pleased to see visitor numbers from GB increasing by +11.3% for January to July this year, an extra 178,200 British visitors compared with the same seven-month period in 2013. We are determined to ensure that tourism growth continues.”