Continuing with last year’s tourism growth, Ireland’s top attractions are seeing visitor numbers of people taking a vacation in Ireland up about 10% so far this year. These top attractions are notably seeing a rise in British visitors taking a trip to Ireland, the first increase since the recession first hit.

The number of people who visited the Cliffs of Moher in the first seven months of this year is about 9% higher than over the same months in 2013. “For the first time since 2006, we are seeing growth from the all-important British market,” said Katherine Webster, director of the Cliffs of Moher Visitor Experience.

The Cliffs of Moher are also found to be a hit with German, French and US tourists – as well as tourists from a range of other countries. The number of sightseers visiting the Cliffs of Moher in the first seven months of this year is approximately 9 percent higher than over the same months in 2013.  “The German, French and US markets are all performing strongly,” said Webster. “We are also continuing to see excellent growth from new and developing markets like Australia, China and Russia.” 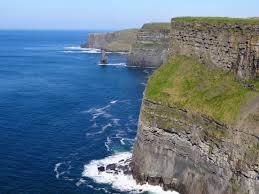 The Cliffs of Moher, one of Ireland top attractions is set to see a rise in visitors in 2014.

Also believed to be the cause of visitor numbers increase is the launch of new flights into Shannon Airport earlier this year.  So too has the Wild Atlantic Way, the west of Ireland tourism trail launched last February.

In Dublin there has also been a notable rise in visitor numbers.  “We had a good year last year with The Gathering – and this year is up again,” said Paul Carty, managing director of the Guinness Storehouse. “We had 700,000 visitors in the first seven months of this year – that’s 10pc higher than the same time last year.”

In the first seven months of 2014, there was a 25 percent jump in the number of British tourists visiting the Guinness Storehouse, a 24pc increase in American visitors and a 10pc rise in German visitors.

“The British market fell off a cliff a few years ago,” said Carty. “Sterling is stronger now and the British economy is coming out of recession. So British people now have the confidence to travel more. The world’s tourism market is certainly starting to move. The Americans are known as being great travellers – and as soon as there’s economic stability, they start to travel again.”

For private tours of Ireland, Excursions Ireland, a tour operator who arranges day tours around Ireland is taking almost three times the bookings for trips to Trinity College Dublin since May compared to the same months in 2013. About 7,000 people have booked day trips to Blarney Castle through Excursions Ireland so far this year, which is on a par with last year. The tour operator has also seen a notable increase in numbers booking trips to Muckross House and Gardens in Killarney and the Old Midleton Distillery in Cork.

The National Museum of Ireland in Dublin has also seen a nine percent rise in visitor numbers so far this year. “We saw a big increase in numbers after the launch of the ‘Clontarf 1014: Brian Boru and the Battle for Dublin’ exhibition,” said a spokeswoman for the museum.

Dublin Zoo are also seeing a rise in visitors which is has been helped by the recent baby boom at the zoo. In the first seven months of the year, 656,435 people visited Dublin Zoo- a three percent increase on the same months in 2013. “Families are looking for fun, educational activities to do together,” said Leo Oosterweghel, director of Dublin Zoo.