Over 70 iconic sites worldwide joined in on the St. Patrick’s Day festivities by going green for the day.  Each year a host of landmarks go “green” to mark the day with the famous Christ the Redeemer statue in Rio de Janerio, Brazil amongst others going green for the first time ever. 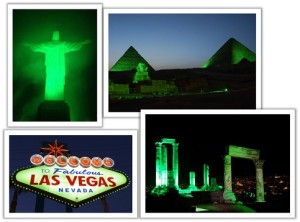 Christ the Redeemer statue, Rio de Janeiro, Brazil; the Pyramids and Sphinx at Giza, Egypt;
the Las Vegas welcome sign; and the Citadel in Amman, Jordan- all going green to celebrate St. Patrick.

Countries going green for the day included sites from Cape Town to Sydney, Stockholm to Moscow, London to San Francisco and Niagara Falls to Chicago. Other new sites to go ‘green’ for the first time included the Citadel in Amman, Jordan, the futuristic new EYE Film Institute in Amsterdam, the Allianz Arena in Munich, Anfield (home of Liverpool FC) and the famous ‘Welcome’ sign in Las Vegas. 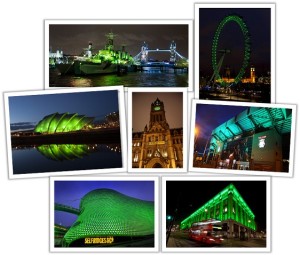 United Kingdom going green in in 2014 to celebrate St. Patrick’s Day, were the HMS Belfast, the museum ship on the River Thames in London;
the London Eye; the Armadillo, Glasgow; the clock on Manchester town hall; Anfield football stadium;
and Selfridges department store in London.

A little closer to home those lucky enough to be taking an Ireland vacation joined in on the many celebrations and parades taking place in towns and villages nationwide from Dublin to Cork to Kilkenny.

‘Old favourites’ participating again this year included the Table Mountain in South Africa, Sydney Opera House, Niagara Falls, the Leaning Tower of Pisa and Burj al Arab in Dubai amongst many many others.

Which worldwide landmark would you like to see green for St Patrick’s Day 2015?