Lonely Planet’s influential travel guide has just ranked Ireland 5th on its list of Top 10 in the World to visit in 2015. This mention in Lonely Planet gives Ireland a much needed boost to an already recovering economy. According to Lonely Planet for people planning on taking a trip to Ireland, there is no better time than the present. The Lonely Planet Guide is found to be hugely influential for those planning a vacation in Ireland.

Each year Lonely Planet publishes an annual collection of trends, destinations and experiences for the next year. In its 2015 guide Lonely Planet has claimed “Ireland is stunningly scenic”. “It is the real deal… its traditions – music, dance, whiskey and beer –  firmly intact, and the cosmopolitan, contemporary Irish are just as friendly and welcoming as their forebears were known to be.”

According to the guide, hospitality is one of Ireland’s “true” qualities. 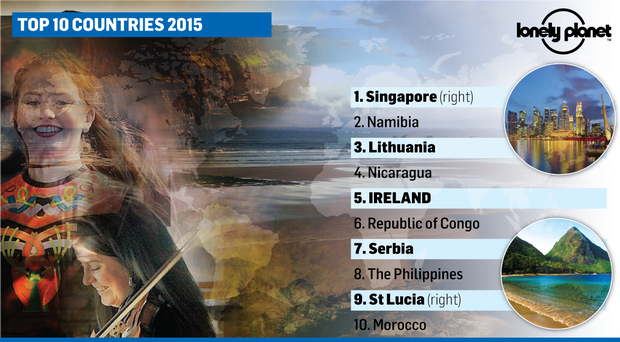 “The Irish themselves are inevitably at the heart of the best the country has to offer. Attend a traditional music session in a small pub in County Clare. Hook up with a walking club and do a little cross-country ambling on a soft Sunday afternoon. Go surfing at Rossnowlagh Beach in County Donegal. Or just strike up a conversation over a pint with the gang sitting next to you in the pub.” “It’s these connections that will make you want to come back.”

The Lonely Planet’s love of Ireland extended specifically to the counties of Kerry and Dublin this Summer when it featured the Cromane Peninsula and Kavanagh’s Pub in Glasnevin in Europe’s Top 50 Secrets. Counties Cork and Derry received widespread media coverage when it ranked amongst the top 10 cities to visit in 2010 as well as 2013.

The popularity of the guidebook can also be damaging however when in 2006 the guidebook listed Dundalk town as being “tough, dour and charmless”.  Now positively we can advise that almost a decade later Ireland has received a glowing reference for people planning a trip to Ireland “With the Wild Atlantic Way now fully open and a new sense of optimism surging through the country, 2015 really is the time to go to Ireland,” a Lonely Planet spokesperson said.

“The country’s stunning landscape and incredible hospitality are on par with the globe’s top tourist destinations, Ireland should be on everyone’s must visit list.”