Posted on June 16, 2010 by DiscoveringIreland

Our post in april on the Sheehan coat of arms proved a great success with lots of feedback and questions so here we go again with another excellent piece on the Irish Surnames kindly provided by Eddie from Araltas again. 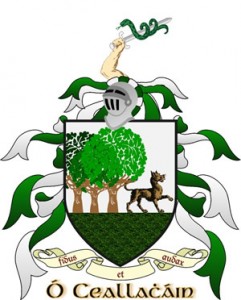 In direct line from Ceallachan, King of Munster from 935 until his death in 954, comes the widespread family of O Callaghan. Ceallachan was also Chief of the Eoghanact tribe which included the most powerful families in Munster, including the MacCarthys. Ceallachan became a folk hero and is the ancestor of many of the families which are still in the County Cork area. Even further back than Ceallachan’s time, there is a manuscript in Dublin’s Genealogical Office showing the tree of posterity of Milo, circa 1400 bc, which includes the progenitors of the O Callaghans and continues up to AD 1614! There is also a manuscript that records a pedigree of the O Callaghan chiefs and their vast territories, from 900 up to 1933. They were settled in County Cork until about 1670 when, as with so many Gaelic families, they were driven to Connacht.

Genealogists believe the name Ceallachan is derived from the word strife. This is certainly appropriate for King Ceallachan who, in the heat of his youth led his warriors to ravage counties Meath, Kilkenny and Waterford, not even hesitating before plundering the monastic settlement at Clonmacnoise. He it was who defeated Cinneide, father of the great Brian Boru, who was to drive the Norsemen from Ireland and give his name to the O Briens.

From the seventeenth century when the family dispersed, two distinct lines emerge. One fled to Spain and have long since become Spanish citizens, while the other lived for centuries at Lismehane, their mansion near the village of O Callaghan’s Mills in County Clare. It was through intermarriage with related Westropps that they consolidated their properties and acquired the additional surname.

Don Juan O Callaghan (b. 1934), the O Callaghan Chief of the Name, is a lawyer in Barcelona, Spain. Don Juan is in the direct line from Ceallachan who was the 42nd Christian King of Munster.

In 1641, just before Cromwell’s army forced many of the Gaelic landowners to flee abroad, Colonel Donogh O Callaghan was a member of the Supreme Council of the Irish Confederation of Kilkenny. Following the rebellion of that year, he lost his property, and was outlawed. Another member of his family had preceded him abroad, this was the Abbe John O Callaghan (1605 – 54), a notorious Jansenist.

Cornelius O Callaghan (1742 – 97) of Shanbally Castle, Clogheen, County Tipperary, was created Baron Lismore in 1785. His son was known as the 1st Viscount Lismore and his daughter was the mother of one of the Dukes of Devonshire, whose family owns Lismore Castle.

Father Jeremiah O Callaghan (1780 – 1861) blazed a trail through Paris and Rome, preaching vehemently against usury, rack-renting and capitalism. When he went to London he was actively supported by William Cobbett, a reformer and journalist. Eventually Jeremiah was found a congenial clerical post in North America, where he earned the name “Apostle of Vermont”, befriending both the French Canadians and the immigrant Irish.

Edmund Bailey O Callaghan (1797 – 1880) of Mallow, County Cork, studied medicine in Dublin, Paris and Quebec. He dabbled in politics in Canada, which led to his having to escape to Albany, New York, where he settled and practised medicine. He studied the records of the Dutch founders of New York and wrote the first published history of the city. There was no financial profit from this huge labour, yet with his own money he published a second volume. He produced eleven quarto volumes of State Records or Documentary History of the State of New York, 1849 – 51, plus an astonishing variety of other publications.

One of the first Roman Catholics to be admitted to the legal profession in Ireland since the penal laws were repealed was John Cornelius O Callaghan (1805 – 83). He was a Young Irelander and was on the staff of the Nation newspaper. His great work of 25 years, History of the Irish Brigades in the Service of France from the Revolution in Great Britain under James II, to the Revolution in France under Louis XVI was published in Glasgow in 1869 in eight volumes. He declaimed, “I love, not the entremets of literature, but the strong meat and drink of sedition – I make a daily meal on the smoked carcass of Irish history”.

Sir George Astley O Callaghan (1852 – 1920), a London-born O Callaghan who was the son of an army captain, was the admiral who commanded the frigate that entered Peking in 1900 during the rising of the “Harmonious Fists”, commonly known as the Boxer rebellion.

There were Callahans who fought at Bunker Hill in the American Revolution.

Genealogists give scant recognition to women. To be recorded they have to be an heiress, or have some special talent (or notoriety). In America there was Trixie Friganza Delia O Callaghan (1870 – 1955) who was an actress and singer.

Rose Mary O Callaghan Westropp of the Lismehane branch is mentioned in Burke’s Irish Family Records as having painted the great jockey Pat Taafe on that most loved of Irish racehorses, Arkle.